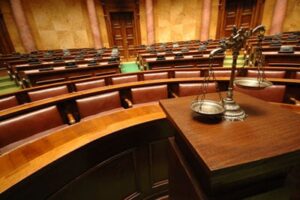 WHEREAS, the President of the United States has declared a national emergency in response to the outbreak of COVID-19, also known as the “Coronavirus;”

WHEREAS, the Governor of the State of California has declared a state of emergency in response to the outbreak of COVID-19;

WHEREAS, the Centers for Disease Control and Prevention has recommended that throughout the United States, for at least eight weeks, all gatherings should be limited to no more than 10 people;

WHEREAS, local public health departments have recommended that large gatherings be avoided, that elderly and other vulnerable populations avoid person-to-person contact, and that employers allow employees to telework to the extent practical;

WHEREAS, to date, several hundred people within the Central District of California have been confirmed to be infected with COVID-19 and the number of those infected continues to rise, causing an emergency pandemic;

WHEREAS, the Court has issued General Order Nos. 20-02 and 20-03 regarding the Coronavirus public emergency, implementing temporary emergency procedures;

WHEREAS, since the Court took action to implement those emergency procedures, COVID-19 has continued to spread among the population of the Central District of California;

With the consent of the Executive Committee, the Chief Judge orders as follows:

The Continuity of Operations (“COOP”) Plan for the Central District of California is hereby activated, effective March 23, 2020 through and including May 1, 2020. The COOP Plan may be extended or inactivated as necessary.

The activation of the COOP Plan is necessary to ensure the continuous performance of essential functions and operations of the Court.

The following are examples of actions that will be taken pursuant to the COOP Plan:

-All of the Courthouses of the Central District of California will be closed to the public except for hearings on criminal duty matters, as discussed below.

-In civil cases, no hearings will go forward except for emergency timesensitive matters, such as requests for temporary restraining orders and preliminary injunctions, as ordered by the assigned judicial officer. Any hearings on emergency civil matters will proceed telephonically only. Pro se litigants must mail their filings to the Clerk of Court at 255 E. Temple Street, Suite TS-134, Los Angeles, CA 90012-3332.

-In criminal cases, criminal duty matters will go forward in the Edward R. Roybal Building and United States Courthouse in Los Angeles only. All criminal document duty will be handled by each division in the normal course of business. Telephonic hearings on other criminal matters may proceed as directed by the assigned judicial officer.

-Chambers staff will be directed to telework except as otherwise directed by their assigned judicial officer. The Clerk of Court will implement a telework policy for the staff of the Clerk’s Office and the Probation and Pretrial Services Office at her discretion.