Home | Blogs | I Have Debts and Little Income. My Spouse Has a Good Job. Should I file for Bankruptcy?

I Have Debts and Little Income. My Spouse Has a Good Job. Should I file for Bankruptcy? 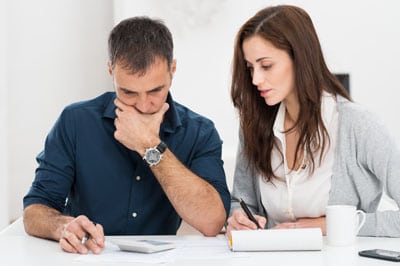 As is so often the case, the answer here is that “it depends”. Only an experienced bankruptcy lawyer can provide reliable advice regarding your options. Here, however, is some general information.

Debts incurred during marriage, are most often owed “jointly and severally”. This means that the creditor can seek repayment of the full debt from either spouse or, more commonly, both. Loss of income by one spouse due to downsizing, disability or other causes therefore places pressure on both to continue paying their bills. When a couple with joint debts decides that bankruptcy is the only viable solution, they will almost always be advised to file a joint bankruptcy petition.

In either scenario, odds are high that one or both partners have debts − credit card balances, student loans or the like − for which only they are legally responsible. At least in terms of legal liability, one spouse’s loss of income jeopardizes only his or her credit standing.

So Who Should File?

One partner’s individual filing does not compel the other to follow suit. If only one spouse has significant debt in his or her name alone in most cases there is little advantage to a joint filing. However, in either of the following situations, an individual filing by only one spouse can result in the worst of both worlds: This is because the filing will make the couple’s jointly owned property available to be sold to satisfy the filing spouse’s debts, but will not relieve the other of liability for the joint debts.

Individuals Should Consider Filing Before Marriage

Individuals may generally file under only two chapters of the Bankruptcy Code, 7 and 13. Particularly for individuals with few non-exempt assets, a Chapter 7 liquidation bankruptcy filing is usually preferable, as it completely eliminates most debts, is typically concluded in less than a year and requires the debtor to surrender only those assets not protected by certain exemptions. Unsecured creditors such as credit card issuers and medical providers, do not ordinarily receive any repayment in a Chapter 7 case. By contrast, in a Chapter 13 case, the debtor must complete a 3 or 5 year repayment plan. While unsecured creditors are not repaid in full, they do recover some amount. Prior to 2005, a person filing for bankruptcy could freely choose between the two options, regardless of his or her income. Not surprisingly, a majority of those with few or no non-exempt assets filed under Chapter 7. Concerned that individuals with significant income were abusing the system, Congress amended the Bankruptcy Code to include an income-based “means test” which prospective Chapter 7 filers must now pass. Only those persons whose income is below the state median level for their family size may now proceed under Chapter 7.